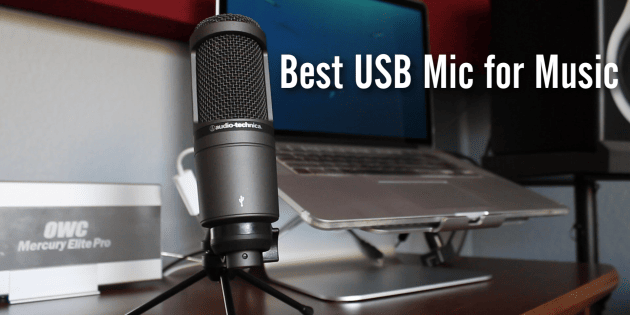 Order the AT2020USB HERE for the cheapest price available:

Looking for the easiest way to start getting professional voice recordings? Introducing the Audio Technica AT2020, which is one of the top-selling USB microphones today. All you have to do is plug it in and start recording. Stay tuned to learn more about the AT2020 during this in-depth review.

Hey, what’s up guys, ODi Productions here from RecordingNOW.com with the Audio Technica AT2020 USB Microphone. The company Audio Technica needs little introduction since most of you are probably familiar with their best-selling headphones, the ATH-M50 and M50x.

For those who don’t know, Audio-Technica is a long-established brand in the audio world, and much of their success actually comes from their long line of professional studio microphones, one of which is the AT2020. Now, the AT2020 started off as solely an entry-level studio microphone and was made for recording music such as vocals and guitar. Later, they created a USB version of this popular microphone, which has now grown in popularity due to its plug and play simplicity, so anyone can pick one of these up and start recording.

Just to let you guys know, what you’re hearing right now and throughout this video is an actual recording from the AT2020. This should give you guys an idea of the quality you can expect from this microphone. Now let’s move on to the review!

First, we’re going to start off with an unboxing to show you guys what you’ll receive when you purchase an AT2020.

Opening up the box, the first thing we get is an owner’s manual.

Then we get a nice little leather carrying case that includes the USB cable which powers the AT2020 while connecting it to your computer.

Then we get the bottom of the included mic stand, followed by the top part which screws onto the bottom legs.

Finally, we get the AT2020 wrapped in some plastic.

As far as features go, the AT2020 doesn’t come with a lot of them, and that could be a good thing. The whole point of a USB microphone is plug and play, and that’s exactly what the AT2020 is designed to do.

Other than the USB cable, the AT2020 only comes with this tiny mic stand that I honestly think could use some improvement. First off, it doesn’t really add enough height to the microphone to easily record from your desk without hunching over, but there are workarounds.

TIP: You could always buy one of those boom scissor arm mic stands that clips to the edge of your desk, or even a traditional one that is planted on the ground.

Also, the stand doesn’t fully support the mic’s weight unless you put one leg directly in front of the mic. One feature that I wish the AT2020 had is a volume Gain knob, which would let you control the microphone’s volume directly on the mic itself. Instead, you have to go into your computer’s settings to set the volume, and this can become a hassle.

Although the AT2020 doesn’t come with a lot of features, one of its greater strengths is the sound quality, especially for a USB microphone.

I would describe the sound as very high-definition in the high frequencies, with a smooth lower and mid-frequency response. This mic definitely focuses more on the highs rather than bass response, and you end up with a sound that is very crisp and transparent. What I like most is how detailed the highs are while still sounding pleasant, since most other microphones just sound harsh due to overly hyped high frequencies.

You have to remember that the AT2020 is originally designed as a studio microphone, despite being an entry-level one, it still had to be able to record singing and instruments like an acoustic guitar. Considering its studio background, it’s no surprise that the AT2020 easily excels for gaming commentary, podcasts, and voiceovers.

What does surprise me, however, is the AT2020’s ability to record music as well. So if you’re looking to start singing or rapping, or even recording something like acoustic guitar, I definitely think the AT2020 is a solid choice for beginners.

Overall, the Audio-Technica AT2020USB surprised me for a USB microphone. Even though the AT2020 doesn’t come with many features at all, I think its greatest strength is its plug and play simplicity, followed by its impressive sound quality and detail.

The AT2020’s studio sound quality alone makes it a great tool for everything from commentary to singing, and even recording instruments like an acoustic guitar.

If you’re interested in getting a deal on the Audio Technica AT2020USB, click the link below to where you can order the AT2020 for the lowest price available (updated daily).

Last but not least, please don’t forget to comment if you enjoyed this review. If you have any questions at all about the Audio Technica AT2020USB or recording in general, leave them in the comments below.

Order the AT2020USB HERE for the cheapest price available: