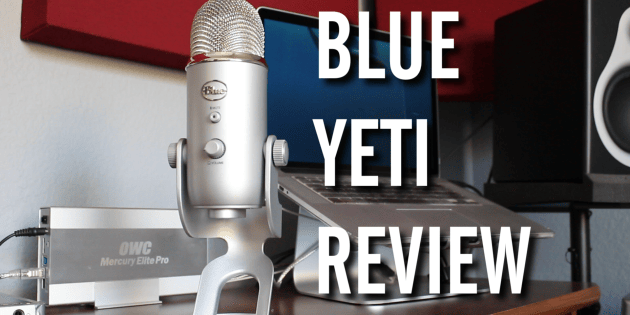 Order the Blue Yeti HERE for the cheapest price available:

Disclosure: Affiliate links on this page may provide a discount and in return, give us commission in order to run the website 🙂

Are you looking to start recording vocals or commentary on a budget, but still want that professional sound? Introducing the Blue Yeti microphone, which is the number one selling USB microphone on the market today. Stay tuned to learn more about the Yeti during this in-depth review.

Hey, what’s up guys? ODi Productions here from RecordingNOW.com with the Blue Yeti, which audio company Blue describes as “the ultimate professional USB microphone”. Today, we’re going to find out if that claim is true. If you’re watching this video, chances are you’ve already heard of this microphone, but for those who haven’t, the Yeti is the most popular USB microphone today in terms of sales.

Just to let you guys know, what you’re hearing right now and throughout this video is an actual recording from the Blue Yeti. This should give you guys an idea of the quality you can expect from this microphone. Now let’s move on to the review!

First, we’re going to start with the unboxing to show you guys what the Blue Yeti comes with when you open up the package for the first time.

1. The first thing you’ll get is the USB cable that connects the Yeti to your computer for recording, while also powering up the Yeti.

2. Next thing is a little owner’s manual.

3. Other than the USB cable and the manual, the only thing left is the microphone itself, which comes attached to a custom metal stand.

Moving onto the features of the Blue Yeti, this microphone actually comes surprisingly packed with a ton of features, most of which are very useful and convenient.

- Below that is a headphone volume knob that lets you control how loudly you can hear your own voice if you decide to plug in a pair of headphones into the bottom of the Yeti to monitor your voice while recording.

- Looking at the back of the microphone, the Yeti features a “Gain” knob that controls the volume of the actual recording.

- Below that is a pattern selector which is a feature that surprised me for an entry-level microphone. The Yeti features not one, not two, but four different recording patterns to choose from:

1. The first setting is “Stereo” which records the left channel and right channel separately.

2. The second is “Omnidirectional” which records 360 degrees around the microphone in all directions equally.

3. The third is “Cardioid” which records mostly what’s in front of the microphone in a heart-shaped pattern.

4. The last setting is “Bidirectional”, also known as a Figure-8 pattern, which records the front and back of the microphone while reducing sounds from the left and right sides.

Now I honestly don’t think that having 4 different recording patterns is necessary, since you’re going to want to record vocals and commentary in Cardioid 99.9% of the time. Not to mention, most professional studio microphones feature Cardioid as their only recording pattern. Nevertheless, it doesn’t hurt to have the options.

- Lastly, one feature that I think is incredibly useful but often overlooked is the custom metal stand that the Yeti comes attached with. The metal stand matches the metallic silver finish on the microphone and makes it look like such a professional piece of equipment. On top of that, the stand is very durable and raises the height of the microphone to about mouth level so you can record directly from your desk without having to hunch over.

Now for the category that most of you have been waiting for… the sound. If you’ve been watching the video, then you’ve already been listening to an actual recording from the Blue Yeti itself. As a professional music producer and audio engineer, I’m honestly impressed with how good the Yeti sounds for a USB microphone that is truly plug and play.

If you’re planning on using this microphone for gaming commentary, podcasts, or voiceovers, I have no doubt that the Yeti will get the job done with ease. I would describe the sound of the Yeti as having a decent bass response and crisp highs, resulting in a pretty full sound.

Now with that said, the Yeti isn’t perfect and does have some limitations. First off, the microphone is very sensitive in terms of volume so you’ll need to turn down the gain to make sure your recordings don’t overload. I set the gain to a little below 1/4th, just under 9 o clock, and this is plenty loud for voiceovers.

Also, the frequency response is definitely hyped in the highs, and this may result in some harsher-sounding recordings, but many people perceive the sound as crisp instead.

Lastly, you definitely have to position yourself carefully in order to get the full quality out of the mic. I record with my mouth about 4 to 5 inches from the head of the microphone, speaking directly into the mic. This positioning allows the mic to pick up my voice with very little room noise in between, but still sounding natural as opposed to getting right up to the mic.

Feel free to listen to dry and mastered voice recordings using the Yeti below:

Bottom line, the Blue Yeti is the number one selling USB microphone for a reason.

Considering the variety of features, the custom stand, and the overall look, it’s clear that the company Blue designed this microphone mainly for people looking to get into commentary, podcasts, and voiceovers. The plug-and-play simplicity combined with professional sound makes the Blue Yeti a no-brainer for its price range.

If you’re interested in getting a deal on the Blue Yeti, click the link below to where you can order the Yeti for the lowest price available (updated daily). I’ll also include some accessories that you should get to get the most out of this mic.

Order the Blue Yeti HERE for the Cheapest Price Available: