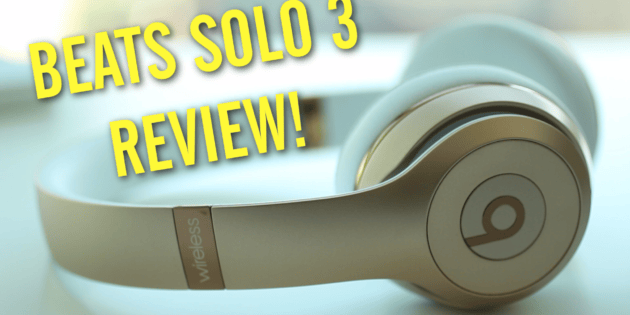 Order the Beats Solo 3 Wireless HERE for the lowest price available (Do NOT pay retail!):

Disclosure: These links may provide a discount and in return, give us commission in order to run the website 🙂

Today we’re reviewing the latest headphones from Beats, the Solo 3 wireless. Apple acquired Beats during the summer of 2014, and this 3rd generation of Solos represents one of the first offerings from Beats while under parent company Apple. Due to a combination of aggressive marketing and a multitude of Tech Reviewers, blogs, and forums making unfavorable reviews about earlier generations of Beats products, the general masses are quite divided on Beats as a brand today. My goal is to provide a 100% honest review from a professional perspective, without any of the hype. Stay tuned.

Alright listen up, I know that just by having Beats in the title of this video, I’m inviting every single Beats hater to drop a dislike and troll comment, but before you do that, I dare you to watch this video through before making your judgment. In fact, I double dog dare you. Anyways, back to what I was saying. Beats is no doubt the most controversial thing to hit the audio world since… well… ever.

No brand has been more polarizing than Beats, but at the same time, no headphone brand has seen as much success when it comes to sales other than perhaps rival company Bose. Now this is a fact, Apple acquired Beats for 3.2 Billion, which is just unheard of for a company built primarily from headphones.

The problem that I see today, is that too many people hate Beats just because someone on the internet said they suck.

Now the second-generation of Beats is where things actually changed for the better. During this generation, Beats actually split from partner company Monster and for a period were even under HTC. If you saw my review of the Beats Studio wireless, you’d know that the 2nd gen was a huge leap in all aspects, sound quality especially. Still, they were overpriced when they retailed for $379, but now priced at around $230 and below, they’ve reached fair market value and make for a decent Bluetooth contender.

This all brings us now to the third-generation of Beats headphones, and the first release under parent company Apple. Pay attention because this is where things get interesting.

The Solo 3 wireless retains much of the same exterior styling as the Solo 2, however, it’s clear that Apple really upped these headphones in the technology department.

Let’s start with the W1 chip, which is a big deal because it’s a new type of wireless connectivity that offers much improved battery life and wireless range, along with potential for higher streaming quality in the future as compared to plain ol’ Bluetooth.

Now the W1 chip only works with fellow Apple devices, but it makes connectivity happen in a snap, you just turn Bluetooth on on your Apple device, turn the headphones on, and the Solo 3s will pop up in an instant.

Due to this W1 chip, battery life is rated at a whopping 40 hours which is just fantastic. Most Bluetooth headphones today hover around the 20 hour range, so this effectively doubles that.

One interesting idea is that the firmware of the Solo 3s can be updated in the future, and since the W1 chip is already in place, this offers the potential for even more improved streaming quality down the line.

Now let’s talk about price and where the Solo 3 sits in the headphone market.

The Solo series is an ON-ear headphone as opposed to over-ear, and by and large, most premium Bluetooth headphones are over-ear. We’re talking about the Studio wireless, Bose QC35, Sennheiser PXC 550, Sony MDR-1000x, etc.

With that said, the Solo 3 doesn’t compete with top-of-the-line over-ear headphones by design, but also when it comes to price.

All 4 of those over-ear headphones retailed for an average of almost $400, and some still cost that today.

Secondly, the Solo 3 is a Bluetooth wireless headphone. I can’t stress it enough that you can’t be comparing 10 year old wired headphones to wireless headphones, it’s like the difference between an automatic and a manual car, they’re for completely different markets. One of these can connect to an iPhone 7, the other can’t.

With all that being established, let’s jump into the review and judge the Solo 3’s by each category.

Stylistically, the Solo 3 is largely identical to the Solo 2. You know what they say, “If it ain’t broken, don’t fix it”.

Beats headphones are known as fashion statements, and deservingly so, they come in a large number of colorways reminiscent of the iPhone such as gold, rose gold, silver, gloss black, matte black, and possibly more in the future.

There’s something for everyone here. The overall profile is extremely sleek and streamlined due to the smaller on-ear design. No bulging earcups to make you look like a dork, and one of the few headphones that actually can be considered fashionable.

There is a bit of clamping force and my ears do warm up after a short period of time, however, I can still wear these for about an hour or 2 without discomfort.

One note however, is that when I take them off after a long session, then my ears start to feel the pain. I guess I’d rather feel it with them off than when they’re on, but it shows they’re not perfect.

Overall, comfort is decent for an on-ear headphone, but not as plush as some over-ears.

Build quality has never been a strong point of Beats products, and the Solo 3s haven’t really moved the needle in my opinion. They look and feel the same as the Solo 2s for the most part, but only time can tell if these will hold up.

One positive is that I initially grilled the Beats Studio Wireless from the 2nd generation for having extremely subpar build quality, but in their defense, here they are years later and still holding up strong. I’ve worn these daily in the gym and thrown them around without the case, and the only wear is on the earpads which can be replaced.

If this is any indication for how the Solo 3s will last, then I think it’s about average.

For peace of mind, these are backed by a 1-year limited warranty by parent company Apple.

Okay, let’s not beat around the bush. The most controversial and debated aspect of Beats headphones is always going to be sound quality.

Now, as I’ve mentioned earlier in this review, Beats is now on its third-generation of headphones, and that’s a lot of time to improve upon something.

I’ve tested and owned numerous headphones, some retailing for twice the cost of the Solo 3s.

Out of all these headphones, none of them are on-ears, and here’s why.

On-ear, closed-back headphones are inherently disadvantaged. They have much less space to work with and the sound funnels directly into your ear as opposed to over-ears, where sound has more space to dissipate.

The result is usually an overly-boomy headphone that lacks balance.

Now what Beats did with the Solo 3s is quite interesting.

Knowing that the on-ear design would inherently be bass-heavy, they used it to their advantage by really focusing on a punchy low-end, but they made it real tight so it doesn’t bleed into the mids, which can just result in pure muddiness like the 1st gen Beats.

Next, instead of pulling the mids back, they actually boosted the mid response, which pushes the vocals forward and right up front in your face.

Now the one thing which Beats had to sacrifice is the treble region in favor of stronger mids and low-end.

When I first heard these, I was dissatisfied with the lack of bright high-end detail, but I was impressed by the sheer power and fullness of the bass.

What did surprise me was how the increased mids helped to add a lot of body to the vocals, and overall results in a very fun headphone to listen to.

One advantage of rolled off highs is fatigue is virtually zero in these headphones, so you can turn up the volume and jam as loud as you want without really hurting your ears with piercing highs.

Vocals are always loud and in your face, backed by a bass kick that could rattle your brain if loud enough.

Soundstage is nothing to write home about, but for an on-ear closed back headphone it’s much better than I expected it to be.

Another benefactor of the Solo 3 is simply technology. With the new W1 chip and latest Bluetooth technology, headphones from previous generations like the Studio Wireless just don’t have the same streaming quality.

Think of it like this, imagine watching something in 1080p versus 720p. Even if you had the most generic brand 1080p TV versus the best 720p TV, the 1080p TV is still going to look good simply because of the higher resolution.

With the Solo 3s, streaming quality is much improved over previous generations of Bluetooth headphones, and the source quality of your music is less compressed. That’s always a welcome improvement in my book.

Alright so bottomline, the Solo 3 is a stylish, lightweight on-ear headphone with 40 hours of battery life from updated hardware. They have an extremely fun, punchy sound with mid-forward vocals and none of the mud from the 1st generation. The bass on these is ridiculous, in a good way.

Now they originally retailed for $300, to which I would have said that they are definitely overpriced, but having already dropped to just $219 in just a few months, they are already approaching fair market value.

I predict the Solo 3 to drop down to $199 and below if the Studio 3s come out later this year.

So if you’d like to pick up a pair of these fun headphones for on the go, click the link in the description below for the lowest price available today.

Order the Beats Solo 3 Wireless HERE for the lowest price available (Do NOT pay retail!):