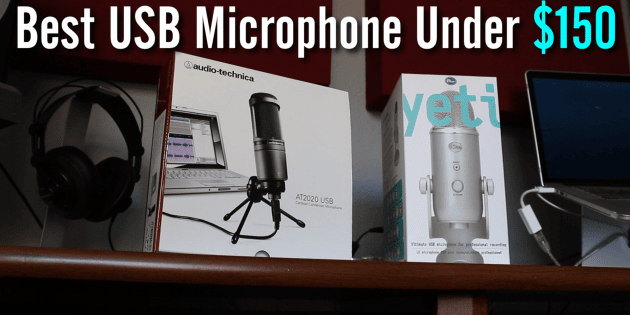 Order the Yeti or AT2020 HERE for the lowest price available:

Disclosure: Affiliate links on this page may provide a discount and in return, give us commission in order to run the website 🙂

Are you looking for the best USB microphone under $150? Today we’re comparing the top-2 selling USB microphones, the Blue Yeti and the Audio Technica AT2020USB. Stay tuned for this in-depth comparison.

Hey whatsup guys, ODi Productions here from RecordingNOW.com, and I’ve got both the Blue Yeti and the Audio Technica AT2020USB here for comparison. If you’re watching this video, chances are you’ve heard of at least one of these microphones, if not both, since they are the top 2 most popular USB microphones in this price range. Today we’re gonna go over the Features of each microphone, the build quality, and of course the sound.

(In Video: And just to let you guys know, you’re currently hearing my voice through the Blue Yeti. I’ll switch over to the AT2020 halfway through the video to let you guys hear the difference, but keep in mind this is just a voice recording which may not show the true potential of each microphone.)

Now let’s get on with the comparison!

When it comes to features, the Blue Yeti blows the Audio Technica AT2020 out of the water! The Blue Yeti features a dedicated mute button, headphone volume knob, direct headphone monitoring, a volume gain knob, and four different recording patterns.

(It’s worth noting that the AT2020 does come in a Plus version which does feature direct headphone monitoring, but it also costs more and I don’t think is worth it for that feature alone.)

In the AT2020’s defense, I find the Yeti’s four different recording patterns a bit unnecessary, as most recording should be done in Cardioid, which is the only pattern offered by the AT2020. I do think the absence of a mic gain knob on the AT2020 is a disadvantage.

Now both of these USB microphones feature their own desktop stand and once again, the Yeti blows the AT2020 out of the water. The Yeti’s custom mic stand makes the entire package look professional, not to mention it raises the height of the microphone so you can easily speak into the microphone without hunching over. On the other hand, the AT2020’s stand is flimsy and barely raises the height of the mic above the desk, which means you might have to bend down a little to speak directly into the mic.

Despite the big difference in features, the AT2020 and Yeti share the single most important feature of these microphones, and that is the plug and play simplicity. Both microphones work as easily as advertised, just plug them in via USB and you’re good to go.

In terms of build quality, both of these USB microphones excel in this category. Both the Yeti and the AT2020 are made of metal and feel solid and heavy in your hand. Both microphones feature metal grills that will adequately protect the mic capsules underneath.

The only difference in build quality is in the stands that come with each mic. I’ve already mentioned that the Yeti’s custom metal stand is great, and it definitely has a sturdy feel to it.

On the other hand, the AT2020’s stand seems like an afterthought by Audio Technica, and it can barely even handle the weight of the mic itself if you place it between two legs. In order to prevent it from toppling over, you have to place one leg directly in front of the mic.

Now the Sound of these microphones is probably the most important category for most people, and this is a category where the AT2020 might have a slight upper hand.

Now the reason why I think the AT2020 has the upper hand when it comes to sound is because the AT2020 can record music such as singing, rapping, and guitar at a pretty decent quality since the AT2020 was originally a studio microphone, later converted into a USB mic, which might describe the lack of features.

On the other hand, the Yeti seems a lot more focused as a USB microphone and would excel more for commentary, podcasts, and voiceovers.

Overall, the sound quality of these USB microphones is impressive considering that they’re just plug and play, and not dedicated studio microphones that require an audio interface.

Bottom line, at the same average price of about $129, you can’t really go wrong with either of these USB microphones if you’re looking to get started with professional recordings.

Personally, I prefer the Blue Yeti because it comes with a host of features, especially the custom metal stand, which gives the Yeti a lot more eye candy over the AT2020 as well. I would recommend the AT2020 for people looking to record music such as singing and rapping, or even instruments like an acoustic guitar.

I’ve included links to where you can purchase either the Blue Yeti or the Audio Technica AT2020 for the lowest price available in the link below. Both of these mics usually cost around $129 each, but sometimes they can be found for $100 through the included links. Updated daily.

Last but not least, please don’t forget to Thumbs Up and Comment if you found this video useful at all. If you have any questions at all about the Blue Yeti or the Audio Technica AT2020, leave it in the comments below.

Next, feel free to watch the in-depth reviews of either microphone, where you can hear more of each microphone used in their respective reviews:

Order the Yeti or AT2020 HERE for the lowest price available: